The Congos: “Back in the Black Ark” 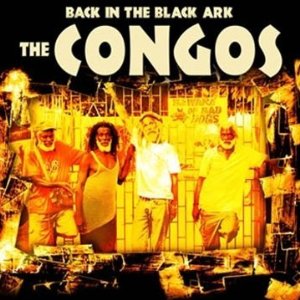 In 1977 the Congos released Heart of the Congos, produced by Lee “Scratch” Perry at his Black Ark studio in Kingston, which is generally considered one of the top 5 or 10 reggae albums of all time. Perry, at the height of his considerable powers at that time, created a swirling, throbbing backdrop atop which the vocals of Cedric Myton, Roydel Johnson, and Watty Burnett soared into the stratosphere.

But that was long ago. The golden age of roots reggae came to a close at the dawn of the 80s, coinciding roughly with the death of Bob Marley and the destruction of the Black Ark, never to return again in this world, I’m afraid. Many of the players live on – both Perry and the Congos have continued to tour and make records – but they are like small ships adrift in a vast sea.

So it was with a healthy degree of skepticism that I approached Back in the Black Ark. The Ark’s been gone more than 30 years, so name-dropping it here can be seen most generously as a nostalgic reference to days gone by, and least generously as a shameless marketing ploy. Scratch only appears on a few tracks, and you can’t expect too much from him at this point anyway; he may have won a Grammy a few years back, but his connection with planet Earth is tenuous at best.

Well, I don’t hold any of that against them; it ain’t easy for a bunch of grizzled old veterans to get attention for their music in this day and age. Taken on its own terms, Back in the Black Ark is not an unpleasant way to spend 51 minutes. Myton’s falsetto is still a thing of beauty, and many familiar names chip in on the musical backing: Horsemouth Wallace on drums, Earl “Chinna” Smith on guitar, and stalwart Boris Gardner on bass. The quality of the material is mixed, with “Garden of Life” a highlight, and a reggae-lite version of “Up on the Roof” ironically a low point.