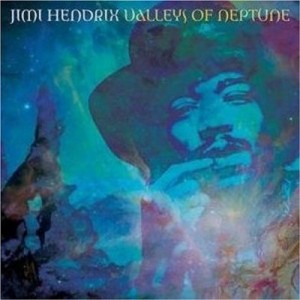 You’d think that after 40 years and numerous posthumous albums, anyone attempting to assemble a collection of unreleased Jimi Hendrix recordings would be scraping the bottom of the barrel. And you wouldn’t be wrong, exactly; very little is new on Valleys of Neptune, released in 2010 by the Experience Hendrix label. “Stone Free,” “Hear My Train a-Comin’,” “Red House,” “Bleeding Heart,” “Lover Man,” and “Sunshine of Your Love” were recorded numerous times and can be heard on the Hendrix BBC sessions album, or the Blues compilation, or various live albums. “Mr. Bad Luck,” “Ships Passing Through the Night,” and “Lullaby for the Summer” are prototypes for the previously released “Look Over Yonder,” “Night Bird Flying,” and “Ezy Rider,” respectively. And the rerecorded version of “Fire” included here is not much different from the original version on Are You Experienced?, just cleaner-sounding and with a slightly extended outro.

That makes the only truly new songs “Crying Blue Rain” – an instrumental jam seemingly based on “Hey Joe” – and the title track, which is as close as this album comes to a revelation for the Hendrix fan. “Valleys of Neptune” is Hendrix in jazzy/cosmic mode, in the vein of “Third Stone from the Sun,” “Castles Made of Sand,” or “Rainy Day, Dream Away,” singing lyrics that are initially uplifting:

I feel the ocean swaying me
Washing away all my pains
See where I was wounded,
Remember the scar?
Now you can’t see a thing
And I feel no pain

I see visions of sleeping peaks erupting
Releasing all hell that will shake the Earth from end to end
And this ain’t good news, bad news, or any news…it’s just the truth
Better save your souls while you can

It’s pretty freaking great, actually. So is that one song worth the price of admission? Almost. Of course the rest of what’s here is not bad, by any means; if these were entirely new, undiscovered tapes by some unknown artist, they would blow your tiny little mind. It’s only in the context of the formidable Hendrix catalog that Valleys of Neptune becomes a lesser entry. I don’t regret the purchase…at ten bucks the price was not wrong, and there’s really no such thing as too much Jimi.