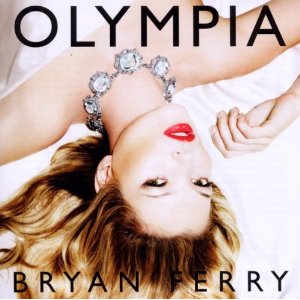 Bryan Ferry spent a long time establishing the Bryan Ferry brand, and he’s not going to do anything to jeopardize it now. Olympia is not a collection of Woody Guthrie covers strummed on a battered old acoustic guitar; it’s 10 sophisticated dance-pop tunes redolent of genteel luxury and glamorous heartache, delivered in an appropriately weathered version of the lizard croon Ferry’s been perfecting since the first Roxy Music album in 1972.

Of all the Roxy/Ferry styles then and since, Olympia perhaps most resembles Roxy Music’s Avalon, Ferry’s most commercial (and some might say safest) incarnation. His old bandmates Phil Manzanera and Andy Mackay make several appearances, and even Brian Eno – who was edged out of Roxy in a Ferry power grab back in 1973 – shows up on 4 songs. Actually, the guest list at this party is pretty impressive: David Gilmour, Nile Rodgers, Flea, Dave Stewart, Chris Spedding, Steve Nieve, and Jonny Greenwood of Radiohead, among others. And of course that’s Kate Moss on the cover, reclining in nothing but an expensive-looking necklace.

But does it all add up to anything? I’m having a hard time making up my mind. This music is, certainly, never unpleasant to listen to, but it’s hard to attach much meaning to it. Part of the problem is that, though Ferry is a quite astute lyricist, his singing style makes him hard to understand; some time poring through the lyrics online was rewarding, but where’s the romance in that?

And “romance” is the operative word, after all, when discussing the world of Bryan Ferry. It may just be that Olympia requires a more romantic setting than my home office in Oakland. Apparently, it sounds pretty good in a room full of writhing, scantily clad young ladies…

← The Fall: “Your Future, Our Clutter” ← The Infinite Jest Deathmarch, Stage 19