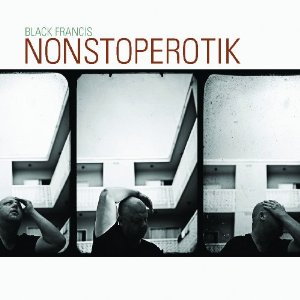 Charles Thompson has been making music under the name Black Francis, or its converse Frank Black, for 25 years now. Think about that one for a minute. I’ll wait.

How’d it go for you? Anyway, for the first 8 or 9 of those years he was a bona fide genius, writer and singer of many superlative songs in a style recognizably his own, first with the Pixies and then as Frank Black. After 1994’s magnum opus Teenager of the Year, though, he seemed to run out of steam. He disappointed us for the first time with The Cult of Ray, then started releasing a series of “live in the studio” albums with his backing band the Catholics; the first of these was quite good, the rest were pretty hit and miss. Still, he kept them coming, apparently thinking that sheer quantity ought to count for something. By the turn of the millennium I’d stopped buying his records, frustrated by the lack of quality control.

After playing with a reunited Pixies in 2004, he reclaimed his old stage name and seemed to find some measure of his old inspiration. 2007’s Bluefinger and 2008’s Svn Fngrs were, for my money, his best work since Teenager. So I was cautiously optimistic about Nonstoperotik, both despite and because of this spiel from Mr. Francis that preceded it:


I finally came into possession of an old guitar someone had given me at a nightclub in San Francisco awhile back; Eric Drew Feldman has been holding it for me there on Haight Street. He convinced me that it looked cool (it was black) and had been given in the spirit of benevolence. Every time I picked it up a nice chord came out and so I lovingly cleaned it with red wine in the dressing room the following night and began to write. I told the tour manager that we could drive in my Cadillac directly to a recording studio in Los Angeles (and he could book one, oh, and a rhythm section, too?) from the gig in San Luis Obispo which would put us at the studio at about 4am. It all happened according to plan and we cut the initial tracks there in the wee hours over a few days, and then moved onto an equally haunted studio in London and Eric Drew Feldman joined us there and we finished the record in St John’s Wood.

I was happy to hear he was feeling inspired; not so happy that he was returning to a quick-and-dirty style of recording, which I always thought sold his talents short – not to mention us, the fans.

So what’s my verdict on Nonstoperotik? It doesn’t reach the towering heights of B.F.’s best work (very little does), nor is it as instantly forgettable as some of the lesser Catholics albums. It starts off with a grinding clunker in “Lake of Sin,” but then immediately changes gears with “O My Tidy Sum,” a pleasant mix of acoustic guitars and beatbox rhythm with eerie keyboard shading by the aforementioned E.D. Feldman, on-and-off Black coconspirator since the Pixies’ Trompe Le Monde. From there we get a spooky song about rabbits (shades of Donnie Darko), a Flying Burrito Brothers cover, and a couple of catchy but unremarkable rockers.

Then things start to get weird. “Six Legged Man” is dedicated to “the undisputed queen and kings of the back beat…Teri and the Possibilities.” As far as I can tell this is a figment of Francis’ imagination; if any such band exists, the internet doesn’t know about it. Perhaps the subject of a future Broadway show; he seems keen to branch out into other media, about which more later.

The nominal subject of the album, sex, begins to make itself known on “Wild Son” (“hey I’m your pitcher and you’re my catcher”) and continues on “When I Go Down on You” (self-explanatory) and the title track, a gentle ballad with Zeppelin-crude lyrics (“I want to be inside/that’s my intention/inside of you/all the way”). And while I’m glad for Charles – he seems to be in a very happy place with his wife, whose image is splashed all over Nonstoperotik – quite frankly the picture of him engaged in any sort of sexual congress is not one I care to carry around in my head.

This song reminds me a lot of the Velvet Underground’s “New Age,” telling an essentially sad story but somehow lifting it up to a level of transcendence. It closes with a stirring surge of strings, which would mix nicely into Aloe Blacc’s “Femme Fatale”; note to self.

Meanwhile, Francis has already moved on; in the course of writing this I discovered that in the last few months he’s released a soundtrack to the silent film The Golem and a collection of B-sides. The man works hard, you gotta give him that.