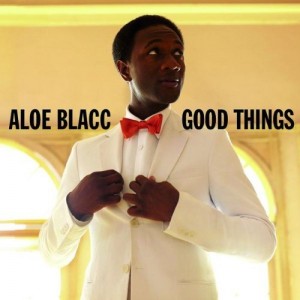 I first heard Aloe Blacc’s music in Amoeba Records on Telegraph. There was a dramatic swelling of strings, then a soulful, buttery voice singing familiar words: “Here she comes…you better watch your step.” I knew I knew the song, but the arrangement was so different it took me a minute to figure out I was listening to a cover of Lou Reed’s “Femme Fatale,” originally sung by Nico on the first Velvet Underground album.

Listening to Blacc’s version, it seemed obvious that this had always been a soul song…I couldn’t believe I’d never noticed before. Anybody who can do that has something going on, so I walked over to the appropriate section and picked up a copy of the album, Good Things. I’ve been happy with the purchase; this is the best album of new soul music I’ve heard since, I don’t know, Macy Gray’s first record? The sound is not self-consciously retro like, say, Sharon Jones and the Dap-Kings, but more like Mark Ronson’s productions for Amy Winehouse: sleek and crisp with a classic feel but lots of modern touches. (Hmm, I wasn’t thinking of Amy when I said that thing about Macy Gray…. Poor Amy. Will she live long enough to deliver that follow-up to Back to Black?)

I wanted to know a little more about this guy who poses so boldly in a red bow tie. Clearly, Aloe Blacc isn’t anybody’s real name; according to The Google, his given moniker is Egbert Nathaniel Dawkins III, which makes you understand why he uses a stage name (though the album’s dedication is signed “Nathaniel”). I thought he was some precocious kid, some out-of-nowhere Cinderella boy; turns out he’s been in the business since 1995, beginning as an MC in a rap group called Emanon. Good Things is his second solo album, and I have to say he made a good choice to sing rather than rap. That’s a hell of a voice he has there, sweet with a little grit in the grand lineage of Marvin Gaye, Otis Redding, and Bill Withers.

Speaking of which, when’s ol’ Bill going to make a comeback? I respect his decision to quit the Long Plastic Hallway back in 1985 (since then, sez Wikipedia, he has only “contributed two songs to Jimmy Buffett’s July 13, 2004 release License To Chill“), but it would be nice to have the chance to see him live. Maybe someday. In the meantime, here’s some music by Mr. Blacc: