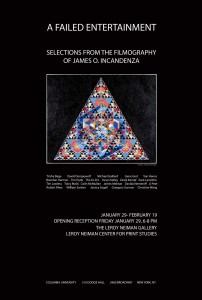 By all means, check out www.failedentertainment.com.

It’s been a rough week in more ways than one. Like many of us, I found this stretch of the book much more difficult; in fact I have to admit I haven’t quite finished it yet. I got lost in the maze that is “James O. Incandenza: A Filmography” and almost didn’t find my way out. Like the man says – at every moment, an infinite regress lies in wait for the unwary.

The comments dropped off rather precipitously, from 25 to 7 as of this writing. I hope that’s not all the marchers we have left; if you’re still out there, by all means send up a flare and let us know. I sense that better days are ahead. If they can pull 33 guys out of a coal mine in what appears to be a pneumatic tube from Brazil, we can weather David Foster Wallace’s ADD until it all starts to make some kind of sense.