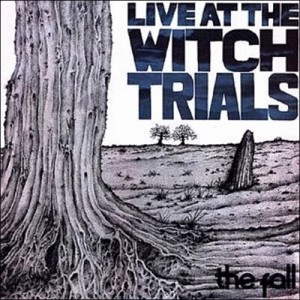 Why the offhand rhymes on the first and third lines? Why not? When you’re Mark E. Smith you do whatever the f**k you want and you don’t worry about it. This sometimes makes you hard to understand, but fortunately there is now the magic of the internets. In a few seconds I can find out what MES is saying in any given song, or at least what somebody out there thinks he’s saying.

Of their own free will my hands started clipping these snippets of Live at the Witch Trials lyrics…they seemed to find this amusing, and perhaps you will too.

He spits in the sky
It falls in his eye
Then he gets to sit in
Talking to his kitten
And talking about Frankie Lymon
Tell me why is it so?
(“No Xmas for John Quays”)

Er, what’s this song about?
Er, nothing.
(“Mother-Sister”)

Everybody likes me
They think I’m crazy
Pull my string and I do my thing.
(“Two Steps Back”)

I still believe in the R and R dream
R and R as primal scream
Tied to the Puritan Ethic
Nonsympathetic to spastics
After all this, still a lonely bastard
(“Live at the Witch Trials”)