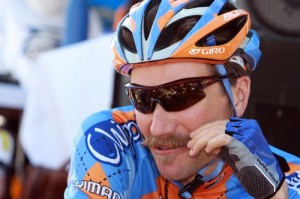 If nothing else, Dave Zabriskie's Moustache is a great name for a band.

A few times this week I’ve found myself watching the Vuelta a España – that’s the Tour of Spain, for you gringos out there – on the very high-numbered cable channel that usually carries women’s beach volleyball. Don’t worry, I’m not going to try your patience with any extended commentary; in truth, it’s been a fairly dull race, except for one thing: Dave Zabriskie’s moustache.

Zabriskie is a talented racer with Bay Area connections and an impressive resume; but he has never previously achieved anything like this moustache. As the TV commentators (the aptly named Schlanger and Gogulski) pointed out, Dave Z. has been getting camera time way out of proportion to his position in the race, and there can only be one reason. It is just that magnetic of a ‘stache.

Now some people are asking, isn’t a bristle brush that prodigious going to adversely affect Zabriskie’s speed? Won’t it create, like, aerodynamic drag? Isn’t that why the cyclists shave every blessed hair off their bodies? Could be; in truth, I wonder if he actually grew the thing of his own free will, or if it somehow attached itself to him. I wouldn’t be at all surprised to find that the moustache is some sort of alien with a plan for world domination. (Maybe it means to win Wimbledon.1) It sure does make Dave look like a B-movie villain.