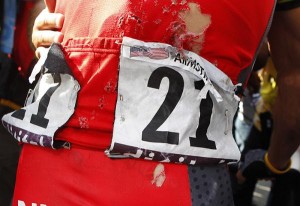 A moment of silence, please.

Well, it looks like we saw the end of Lance Armstrong today.

Back in the day, when he was winning the Tour every year, Lance had both the form and the luck. This year, he seems to have neither. Despite wearing number 21, he’s been dogged by bad luck. For the second time in this year’s Tour, he crashed today at a most inopportune time, right before the beginning of the first big climb. He never really got back into the race, and was further detained by another crash that happened right in front of him for no discernible reason. There’s no saying what might have happened if those crashes hadn’t taken place, but Lance simply didn’t seem to have the legs to hang with the leaders. It was sad to see him cross the finish line almost twelve minutes after the winner, bleeding from both elbows and a knee, his number 21 in tatters. (If I were some cliche-spouting hack, I’d point out here that his Tour hopes were in tatters as well; but that kind of thing is beneath me.)

The winner, by the way, was Andy Schleck, who surprised everyone by riding away from an elite group right at the top of the stage-ending climb. Doubly surprising, Alberto Contador was unable to answer, the first time he’s looked vulnerable in years. The yellow jersey went to Cadel Evans, with Schleck 20 seconds behind and Contador 1:01.

So with Lance out of contention, I’m going to need a new storyline. Armstrong vs. Contador in the Pyranees would have been a compelling contest, but it was not to be. And I’m going to need somebody to root for, I guess. The obvious choice might be Levi Leipheimer, who will take Lance’s place as leader of the Radio Shack team (Levi had a good day and is in 8th place, 2:14 back). But to be honest, I’ve never really cared for Levi. He seems like a nice enough guy, but dull as coller and with a tendency to come up small when it’s Winning Time. I think I’ll throw my support behind Schleck, who has a very likable way about him and looks to have the best chance of dethroning Contador.

Occasionally I wonder, do I really have a reason to dislike Contador, or is it just his rivalry with Lance combined the fact that he doesn’t express himself well in English? Well, when you get right down to it, I don’t have that good a reason to dislike Kobe, either. Sometimes in sports you just need somebody to root against, and that’s the name of that tune.