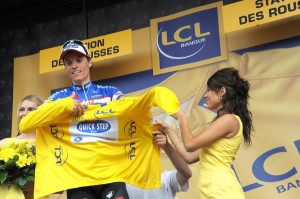 This morning the picture of what transpired at the end of Stage 6 got a little clearer. It seems Rui Costa and Carlos Barredo were fighting because somebody threw some elbows toward the finish line. They showed the whole thing again on the TV: one guy hit the other with his wheel, a few unimpressive punches were thrown, and that was it. Much ado about nada, really, but you take your drama where you can get it, and at least those guys got their names in the paper.

Robbie McEwen, it turns out, was knocked off his bike by a photographer with a very long lens. (Cecil, I know what you’re thinking; I don’t know if anybody lost an eye.) Do I feel sorry for him? Not especially. He was seen during Stage 7 dropping back to the race doctor’s car to get some pills and a balm for his wounds. I’d be careful about that if I was him. You don’t know what a balm’s gonna do, as Jackie Chiles wisely observed.

On to the news of the day: Stage 7 was sort of a warmup for the mountains, with a bunch of smaller climbs but no really difficult ones. The big winner was Sylvain Chavanel, who won his second stage of the Tour and took the yellow jersey back from Fabian Cancellara. It was an impressionnant performance by Chavanel, who is not generally considered to be a threat to win it all. In second place today was a complete wildcard, Rafael Valls of the Footon-Servetto team. This guy is new and so is his team, but he looked quite strong while shooting away from the peloton and damn near catching Chavanel before falling back a bit at the end.

The big names did little of note, mostly riding close to each other searching for signs of weakness. And there was one that it brings me no joy to report: Lance Armstrong spent a long time alone among the Astana riders, his teammates nowhere to be seen, familiar expressionless mask in place as Alberto Contador looked on impassively from behind. Since team strength was supposed to be Lance’s ace in the hole, this was not a good sign. Levi Leipheimer did make an appearance a little later, but still, it was not a quality day from the Radio Shack team. Lance will have a few things to say, and we’ll see how they look when the heavy-duty climbing starts tomorrow.

And I could get into a whole thing here, but instead, I’m just going to turn off my brain now and transcribe the last couple minutes of the broadcast. This seems like a good idea for some reason I can’t really explain. Notice how Frankie Andreu, supposedly a native English speaker, is incapable of forming a complete sentence, while Andy Schleck, despite handicaps of nationality and native language, races upward toward articulateness. Also notice how Phil Liggett seems to be speaking directly to me personally at the end.

Phil: Alberto Contador down into 6th place…Armstong up 4 places into 14th now.

Paul: Well, it’s a big sort-out, I have to say, today, Phil. But all of the big men have come up to the top end of the overall classification, and that’s not really a surprise. I think, looking at Levi Leipheimer, there in 17th place, and Michael Rogers up there in 20th – we can see another big sort-out tomorrow.

Phil: Well, that’s the overall, Andy Schleck is in the mix, and he’s talking now with Frankie Andreu:

Frankie: While you were riding up there, were you able to gauge or look at some of the other competitors in the group…?”

Andy: (Heavy Luxembourgian accent) I mean, I knew when I saw the profile…I knew we’re not gonna drop Cadel or anyone, eh, today…so I expected him to take the jersey. But his team was not quite…didn’t work too much to get the jersey – but, you know, I knew it’s not gonna be a big decisive day today. But to be really honest with you, it was a lot harder than I expected.

Frankie: Tomorrow, obviously, a tougher day with the mountaintop finish. Some of the riders with a chance to get the yellow jersey – will you take advantage of that?

Andy: Of course, but ummm…for me tomorrow…Contador wants to show that he is there, and he’s going to attack tomorrow.

Phil: Ha ha ha…phew, what a great day of racing, it really was. It took a bit of working out at times, Paul. Andy Schleck was very modest there. But he never has mentioned any thoughts of Cadel Evans [ed. note: actually, he did], but I think he’s a huge danger now.

Paul: Yeah, but I think what is important is he knows Alberto Contador has got good legs, and Alberto Contador does want to go out tomorrow and put his fist of authority on this bike race, like Lance Armstrong used to do between 1999 and 2005. If Alberto Contador’s going to be the big man, he has to do that.

Phil: Alright, but don’t forget, it’s the big day out in the Alps tomorrow, and this is where it happens. The weather forecast is good tomorrow, and I suppose that’s a bonus – that means the spring flowers, or the summer flowers, will be out in great numbers, and we will have a great view of the Tour de France in some of the most stunning scenery in the world…. Live coverage will start at 7:30 [Eastern], don’t forget, in the morning – put the coffee on in California.