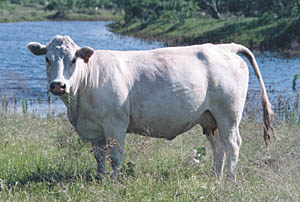 That is one sexy cow.

It was sort of a foregone conclusion that Mark Cavendish would win Stage 6, which was almost identical to Stage 5 except that:

It was just another day at the office for Cavendish, who got his legs back under him yesterday. When he is on form and his team puts him in the right place at the right time, he is simply faster to the line than any other human being alive. Like Usain Bolt, he is operating on a different level than his competitors, who are all very, very gifted at what they do – just not gifted enough.

It was a foregone conclusion in another way, too: I had already heard that Cavendish won the stage, so I was forced to look for drama elsewhere. Even when you don’t know the winner in advance, these sprinter’s stages can be like bad porn: there’s way too much buildup, you know what’s going to happen though not exactly how, and when it’s over you have an empty feeling. But I had also heard that there was a fistfight at the end of the stage, and I was curious to see if it would make the telecast, which tends to whitewash away anything remotely scandalous. I don’t think I’ve heard the words “Floyd Landis” spoken at any point in this year’s proceedings; not even the individual words (no “nest,” no “egg”…).

So I made my way to the end of the broadcast, and there it was: two guys in biking tights throwing punches. For about three frames. Then my recording ran out and I was asked to save or delete. Doh! Either way, there was no more information to be gained; so I deleted.

A quick search revealed that the pugilists were named Rui Costa and Carlos Barredo. But no one seemed to know what they were fighting about. I found a 20-second video that didn’t include any of the actual combat, though you could clearly hear the word “puta.” Maybe one of them was rooting for the Netherlands in the World Cup final?

Another weird detail: Robbie McEwen crashed after the stage, apparently when being taken for drug testing. Suspicious? I may be grasping at straws here. In any case, there were no changes in the big picture yet again. I could practically tell you the top 20 from memory at this point: Cancellara still in yellow, Cadel Evans still in 3rd, Andy Schleck still in 6th, Contador in 9th and Lance 18th, 2:30 back. One hopes there will be some action in the mountains, which start…um…now-ish.