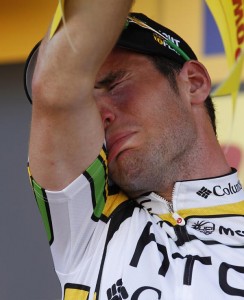 Stage 5 was not one of your heavy-on-the-action stages; it was the other kind, the kind you keep on in the background while you drink coffee, send email, read the paper, pet the cat, look at pictures of Larissa Riquelme, etc. The TV broadcast acknowledged as much, spending as much time focused on sunflowers and medieval ruins as on the peloton.

It did get exciting in the last few minutes, after a half-hearted attempt at a breakaway got erased, when Garmin-Transition tried to pull a fast one with Tyler Farrar, who was supposedly too injured to sprint. Farrar got a lot of hype leading up to this year’s Tour because he is the strongest American sprinter in many a year, but he has yet to accomplish anything, at least in part because of a wrist injury he sustained in Stage 2. Today Garmin was coy about their strategy for the stage, with the assumption being that Farrar’s wingmen Julian Dean and Robbie Hunter would be taking his place.

Instead Dean and Hunter were in their usual position as leadout men, and Farrar took a shot at it, but he didn’t have the goods. Instead the stage went to Mark Cavendish, who shook off whatever malaise has been gripping him and shot to the finish like he had a fusée in his extrémité arrière. I’ve never been a big Cavendish fan; he has just as much attitude as he does talent, and to call his demeanor “brash” would be an understatement – “dickish” might be more like it. But it was hard not to like him as he stood on the podium today weeping openly.

It was a very human moment, and made for an interesting comparison/contrast with the LeBron circus, which finally came to an end today with LBJ deciding to join a Dream Team in Miami. Not that LeBron didn’t come across as human, exactly – he stumbled over his words a lot, for one thing – but he seemed very careful not to appear too happy or too sad, knowing that either one was going to offend somebody. It was a tough day in Cleveland, and a tough day in Oakland, too, where the verdict we’ve been dreading in the BART shooting case finally came down. As of this writing, the city is not yet in flames; I’ll let you know if that changes.