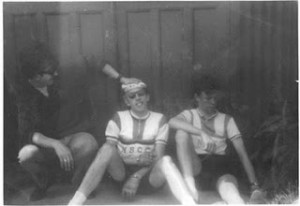 I am told that the man in the middle of this photo is a young Phil Liggett (who, by the way, is a Member of the British Empire, just like Ringo).

It was a day for the old guys today. As previously mentioned, Ringo Starr turned 70. The legendary Bob Roll – who, I learned about 30 seconds ago, is an Oakland native – turned 50. And the Tour broadcast team’s senior citizen, Phil Liggett, was presented for the first time ever with the yellow jersey. Not the yellow jersey, of course, but the one that identifies the wearer as the current leader in the announcers’ prediction competition.

For three years Liggett has been complaining, initially good-naturedly but with increasing crankiness, that the competition is somehow rigged against him. Today, after his correct pick of Thor Hushovd in Stage 3 catapulted him into the lead, his co-workers ceremonially presented him with the jersey and a bottle of Champagne. He immediately chose Hushovd to win again today. You’ve got to love Phil; he’s been around forever, he’s a fixture at these races, and listening to him talk about cycling is just like listening to your grandfather talk about his favorite sport, whatever it is – not always exciting, but always enjoyable.

And that was about all there was to report from Stage 4. It was the shortest stage in this year’s Tour, 95 miles from Cambrai to Reims through France’s Champagne-growing region. After three days of madness, the riders seemed content to rest and recuperate; they may even have enjoyed the scenery, which I don’t think happens very often when you’re working as hard as they do. I was happy to rest along with them, feeling still out of sorts from flying cross-country yesterday. Not only are my arms still tired, but my ears are still a little clogged for whatever reason.

OG Alessandro Petacchi (37 years young) won the stage, more or less stealing it from Mark Cavendish, who also looked out of sorts: uncharacteristically quiet in a prerace interview, uncharacteristically sluggish in response to Petacchi’s acceleration. Fabian Cancellara stayed in yellow and there were no changes whatsoever in the overall picture; that probably won’t happen until Saturday, which is the first mountain stage of this year’s Tour. If you’re like me, you’ll spend a lot of time between now and then catching up on your sleep, because that’s what us old guys do.