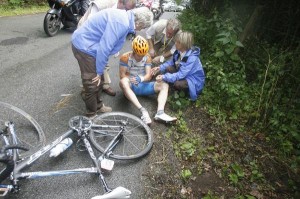 It was a hard day to be a bike rider. (Photo: Roberto Bettini)

There was some fairly detailed analysis this morning of the various crashes that occurred in Stage 1, and guess who was right there in the middle of it, appearing to shove one cyclist into another so he could get by: my old nemesis, jerkface Robbie McEwen. Well isn’t this fun, all the old crew back again; maybe next, a cameo appearance from Sheryl Crow?

Meanwhile, for the second day in a row, what looked to be a flat, boring stage with a meaningless sprint finish turned into complete chaos and carnage. I’m not sure if the race organizers planned it that way – as Levi Leipheimer more or less accused them of doing after the stage – but if they did, kudos to them! The riders hate it when there are lots of crashes and widespread confusion, but ghoul that I am, I love it. Should I feel bad for that? Should this quote from Jens Voigt make me feel guilty?

Remember in the ancient Rome, the gladiator fights they had? It’s going to be awesome, it’s spectacular for the people on the sofa, having a little Bud Light on the side, but for us poor fellows on the road there, for us it’s terrible. It’s hard, dangerous, stressful and basically has chaos, mayhem and broken bones all over it.

It might, if it weren’t for that Bud Light crack; when I drink during the Tour, it’s Champagne and single-malt, thank you very much. (Quick aside: These first dispatches are datelined Annapolis, MD, where I have been enjoying the holiday at my family’s estate. We had dinner at a local tourist trap the other night, and when I asked the waitress what kinds of single-malts they had, her look of innocent stupefaction was heartrending. I wasn’t trying to be a snob, I swear. The whole thing ended up being very awkward for all involved.)

Anyway, apparently something like half the peloton went down at one point or another today, and they were still trickling across the finish line 19 minutes after the winner, Sylvain Chavenel. Chavanel himself is only just recovering from a fractured skull suffered in a crash in this very part of the world – which, did I mention, is Belgium, where the stage went from Brussels to Spa over narrow, slick, often treacherous roads.

Chavanel will be wearing the yellow jersey tomorrow, because he finished more than three minutes in front of the main field, all of whom rode across the line together in a show of solidarity. This means that the main contenders maintained their positions relative to each other, but dropped a few minutes behind Chavanel, minutes which they will no doubt make up once the race turns uphill.

It was very strange to watch the peloton cover the last 10 km or so at what I can only describe as a leisurely pace, then cross the line without anyone trying to get ahead of the field. Current (now former) yellow jersey Fabian Cancellara appeared to be conducting the proceedings, and just before the finish he seemed to gesture impatiently at someone who was getting out of line. I wondered who this might have been, and then looking over the standings, I noticed that the aforementioned Robbie McEwen somehow managed to get himself into fourth place on the day….could it have been he? What a jerkface!