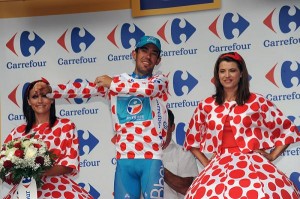 Here's the polka dot dress I mentioned the other day. Tragique, no?

I’m sure that there are days when the Tour riders don’t feel like getting up in the morning and riding another hundred miles through the mountains, just like there are days when I don’t especially feel like writing about it. Today is one of those days, in part because I enjoyed last night’s Los Strawberitos postgame celebration just a little too much; but as Captain Beefheart said, I’m gonna do it anyway, then I’m gonna get right out of town.

They are saying today that Cadel Evans rode yesterday’s stage with a fractured bone in his elbow, and that’s why he gave such a terrible performance. I suppose I ought to feel bad for him, and ought to feel guilty for more or less calling him a big pussy in public. Somehow I don’t. Funny, that.

Today was Bastille Day, which is always a big day on the Tour. Big crowds of people who have the day off for the holiday line the route, and this makes the French riders somewhat less surrender-prone than usual. A few Frenchies got into the breakaway and about the only drama of the day was whether one of them would manage to win the stage. Alas and alack, it was not to be; the fastest man was Sergio Paulinho, for many years a Lance Armstrong domestique, who was given the freedom today to do as he pleased. The French do hold the top three places in the polka-dot jersey (King of the Mountains) competition, which is nice for them.

It was a hard day to stay focused, and apparently the professional Tour commentators were having the same problem. There was a great deal of talk about Napoleon, and the size of the fish in the local lakes, and electricity (it was a lot like listening to Spencois Abdur-Watkeens). At one point Phil Liggett was heard to say of the Peloton, “They’ve lost interest today,” and Craig Hummer – a company boy if ever there was one – commented somewhat bitchily, “The peloton has decided to take the day off.”

One break in the tedium was a nice feature on yesterday’s Man of the Match, Jens Voigt. They replayed last year’s horrible crash where Voigt landed face-down on the pavement at about 50 mph, his bike shooting off sparks as it trailed along behind him. Here’s how the man himself described it:

It looked pretty spectacular, I would almost say…it was like sparks flying off the bike, and me sliding there forever. But despite the speed of the crash and the impact I had, it wasn’t too bad. [Shot of Jens in a hospital bed, face torn to pieces, right arm and leg bandaged.] They stitched it together on both hands and in my face, but only, like, one little broken bone. I consider myself lucky.

That’s right, Jens considers himself lucky. He is one tough S.O.B. Apparently he is tender too; there was a great shot of him cradling what appeared to be a fawn.

Frankie Andreu pointed out that, according to his team’s calculations, Voigt burned 6000 calories in his titanic effort yesterday. Frankie said that this was equal to “300 donuts”; I’m not sure how many metric donuts that is.

And that’s about all the time we have for today. There doesn’t seem to be any graceful way to get out of this thing, so I’m going do distract you for a moment with this article about the Chupacabra, and when you get back, I’ll be gone.