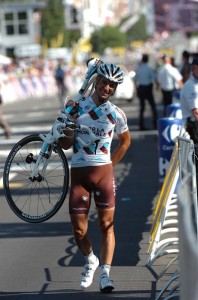 One thing that hasn’t changed since 2005 is that the official Tour de France web site, letour.fr, still sucks. It still looks the same, is still structured the same, and is still virtually useless. Go ahead and try to use it to find out something you want to know. I oser you. I double oser you. I mean, we know technology isn’t a French specialty, but there’s not even a usable search feature, ferchrissakes…OK, OK, never mind; no need to get all worked up.

None at all, none at all…this was just the first of 20 stages, and the stage profile – flat and straight from Rotterdam to Bruxelles (that’s Brussels, Belgium to you and me) – was as boring as can be. Until a dog ran out into the peloton, taking out several riders, including David Millar, Ivan Basso, and Levi Leipheimer (rumors that this was a trained dog belonging to a French team were unconfirmed as of this writing). A breakaway took off, but not too far, then got caught, and…boom goes the dynamite! There were a couple more big crashes near the end that chopped the peloton right in half. Mark Cavendish, favorite to win this and every other sprint stage until someone else proves otherwise, was seen shrugging his shoulders as opportunistic Alessandro Petacchi glided to the win. Everybody else picked themselves up off the pavement and made their way to the finish line, some on foot.

Back in the world of the General Classification, Fabian Cancellara retained the yellow jersey for another day. Cancellara may have the best deal in the world of sports—show up, look pretty, ride fast for a couple of days, then disappear into the background. It’s been a good Tour for the Italians overall, so far. The Americans are feeling OK, too, with Lance Armstrong in 4th, five seconds ahead of the dreaded Alberto Contador; and why shouldn’t we be? It’s the Fourth of freakin’ July, ain’t it?