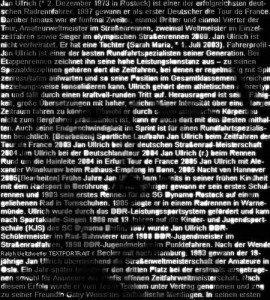 Apropos of nothing: A text portrait of Jan Ullrich by Ralph Ueltzhoeffer.

Today is a rest day for the Tour, and as the riders know, the one thing you absolutely should not do on the rest day is rest. Resting kills all your momentum, and momentum is everything.

They say you never know how your body is going to react after the rest day, and I’ll bet Andy Schleck would have been much happier riding another hundred miles through the mountains rather than sleeping in and getting restless. He looked tremendous in Stage 8, besting Contador at his own game, and some were speculating that yesterday might mark the birth of the next great Tour champion, as well as the demise of an old one.

Unless, of course, Contador was pulling some engaños by intentionally holding back to give his rivals a false idea of his form. It seems unlikely, but he’s a crafty little bugger, you have to give him that.

I haven’t talked much about Cadel Evans, who currently leads the race and looked totally comfortable on Contador’s wheel yesterday. This is because I simply don’t believe in Cadel. I’m told he’s won some great races over the years, but in the Tour he’s consistently found a way to blow it every time he’s had a chance to win. And there he was yesterday, getting all emotional about taking the yellow jersey as if he’d accomplished something. Alfonse, take a memo: Wearing the jersey in Paris means something; in Morzine-Avoriaz, not so much.

Why so harsh, you say? Why is Evans’ emotion a sign of weakness where Mark Cavendish’s was a sign of humanity? Because I’m the Decider, that’s why.

A few other things I’ve decided: