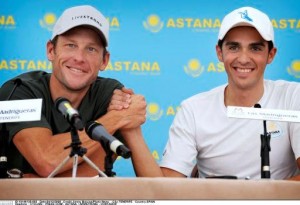 Lance Armstrong and Alberto Contador when they were still pretending to like each other.

It’s been five years since my last home-based coverage of the Tour de France, and in one sense, not much has changed. A lot of the riders who went away for one reason or another are back now – Ivan Basso, Alexandre Vinokourov, Andreas Kloden, and of course Lance himself – with the notable exception of Floyd Landis, who is standing outside lobbing big balls of shit at his former compatriots, and Mickael Rasmussen, who seems to have dropped off the face of the Earth. The broadcast team is the same except for the unfortunate replacement of Al Trautwig with the aptly named Craig Hummer, a sycophantic douchebag with nothing interesting to say about anything.

I did not make the connection till I flipped on the broadcast this evening that today’s Prologue was taking place against the backdrop of Rotterdam, the Netherlands, where they are still celebrating the Dutch national team’s startling World Cup Quarterfinals victory over Brazil. (In São Paulo, I imagine, they are drinking quietly in dark places while musing bitterly over their team’s many shortcomings.) It was actually a pretty damn exciting weekend on the futbol front, what with Ghana going down in dramatic fashion, Germany beating Argentina like a gemieteten Maultier, and a crazy contest between Spain and Uruguay that featured two missed penalty kicks. (Which I missed while helping to raise a flagpole; serves me right for trying to be patriotic.)

The Prologue was tame in comparison, but hey, what do you know…Lance beat Alberto Contador by 5 seconds! It’s not a statement like he made in 2005, when he hammered Jan Ullrich by more than a minute in the first stage, but it is a statement. No big deal in the overall scheme of things, considering the race still has 20 stages and 3,633 kilometers to go, but in terms of bellwethers to watch, about the best we have at the moment.

Back in 05 I had mixed feelings about rooting for Lance, largely because everybody else was rooting for him. This is no longer the case, partly because he’s a sweet, harmless old man now, and partly because Contador comes across so unlikeable, a veritable Spanish Kobe Bryant on wheels. I am flat-out pulling for Lance, but not deluding myself about his chances, which are more than zero and less than great. Like Kobe, Contador is an otherworldly talent at his sport, and he is 11 years younger than Lance (77 in cyclist years). I count three factors in Lance’s favor: 1) He has the stronger team; 2) his knowledge of tactics is superior, as was demonstrated last year when he made the split in a wind-whipped peloton and Contador didn’t; and 3) he and Contador genuinely dislike each other, which will help provide Lance extra motivation, not that he ever needed any. That could work both ways, of course, and who knows what will happen once the Tour begins in earnest; the main storyline could be completely different.

Oh, I almost forgot – the stage was won by Fabian Cancellara, a monster in the time trials who has no chance in the overall race. The guys to watch in that department are his teammates, Frank and Andy Schleck of Luxembourg. Andy came in second in last year’s Tour, while his big brother Frank came in fifth. Neither of them did well today – apparently Andy, who finished 122nd, refused to speak to the press and Twittered “I had a real shit day!” – but they’ll be back. As will I; but for now, I wish you goedenacht.