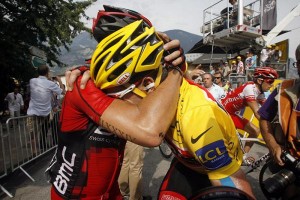 Cadel Evans got crushed on his first day in yellow. Here his teammate is either comforting him or trying to put him out of his misery.

I hate to say I told you so, but Cadel Evans went to pieces today at the first sign of trouble. He cracked badly early in the climb of the Col de la Madeleine and ended up losing 8 minutes to Contador and Schleck, who engaged in a spirited duel on the way up. Schleck kept moving a little ahead, testing, teasing, but Contador was up to the challenge and they stayed together all the way to the finish.

With Evans out of the picture, that puts Schleck in the yellow jersey and Contador in second, 41 seconds behind. It’s shaping up to be a two-man show from here on out, which doesn’t come as much of a surprise. It could end up being a replay of the 1989 mano-a-mano between Greg Lemond and Laurent Fignon, where Lemond came from 50 seconds behind on the last day to break Fignon’s heart and those of all France.

That was the last time the French had a serious contender in the Tour, though they have had plenty of stage winners – including today’s, Sandy Casar, who held on despite an exciting finish that saw Schleck and Contador catching the breakaway inside the last kilometer. The real hero of the day, though, was Jens Voigt. In a brilliant strategic move, Voigt rode in the break almost to the top of the big climb, then dropped back to help his teammate who was coming up from behind, Andy Schleck. Voigt gave everything he had to help Schleck test Contador’s legs, “turning himself inside out” as Phil and Paul like to say.

Voigt has become one of my favorite guys in cycling, a real powerhouse athlete who also brings persönlichkeit to a sport that sometimes lacks it. Not much time for the writing today – things to do, things to do – but this Jens Voigt video is worth at least a thousand words.