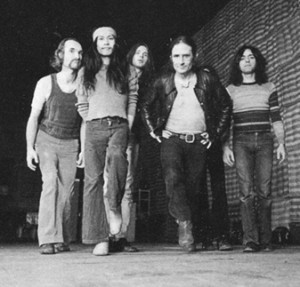 I love the fact that there are still these huge untapped veins of great music out there. For instance, until relatively recently I never listened to the strange and wonderful German band Can. They are a truly unique group, arty/experimental/difficult on the one hand, but with a strong rhythmic underpinning and a fondness for reggae, dub, and even funk. (Yes, Germans can be funky—see also “Kraftwerk.” People forget that funk requires precision: Everything must be exactly on the beat, or it is not funky. There were no accidents, for instance, in James Brown’s music; James understood exactly where every note belonged, and if someone made a mistake, he knew it.)

Can’s music is truly experimental, i.e. not especially well edited, so you have to wade through the failed experiments to get to the good stuff. An additional complicating factor is the vocals. Can’s first “singer” was Malcolm Mooney, about as atonal a vocalist as you’re likely to find fronting a major rock band. Mooney sometimes sounds like an inebriated street person intoning chants the meaning of which are known only to himself; and yet for all that, his singing is not without a strange charm, and he delivers an utterly flabbergasting performance on the psycho-loungy “She Brings the Rain.” According to Can scholar (and former Cramps/Bad Seeds drummer) Jim Sclavunos,


[Mooney’s] unhinged performances may have been part of the attraction for concertgoers, but they were definitely not an affectation: Mooney really was on the brink. The crisis point came during a Can show when Mr. Mooney began repeating the phrase “Upstairs, downstairs” obsessively and non-stop for about three hours before finally collapsing. Not long thereafter, Mooney’s psychiatrist convinced him to return to the United States.

Mooney was replaced by Kenji “Damo” Suzuki, who was only slightly more musical and had a similar penchant for enigmatic, repetitious lyrics. Although he was only in the band for a few years before leaving to marry a Jehovah’s Witness, Suzuki remains a legend to this day, and has served as an inspiration to a whole generation of less-than-classically-gifted vocalists (such as the Fall’s Mark E. Smith, who wrote a song called “I Am Damo Suzuki”). One is hard-pressed to explain Suzuki’s appeal exactly, or Can’s for that matter; this may be a case where writing about music really is like dancing about architecture. So why not have a listen to this Can sampler?

As you’ll notice, after Suzuki’s departure the vocals were handled by remaining band members, and these are less idiosyncratic, though never exactly conventional. Mooney returned to make Rite Time in 1989 and also appears on “Last Night Sleep,” recorded for the Until the End of the World soundtrack in the early 90s. Damo Suzuki, meanwhile, has returned to music as the leader of Damo Suzuki’s Network, a loose association of musicians who convene on an ad hoc basis at a time and place of Damo’s choosing. If I am interpreting his web site correctly, shows are planned throughout Europe and Japan for the rest of this year; if you find yourself in any of those places, please check it out and report back to me.

Interesting random Can fact #2: “Sing Swan Song” was used by Kanye West as the template for his song “Drunk and Hot Girls.” Listen here.