Five years snuck on by

This video of Mr. Bowie on the Dinah Shore show in 1975 is not of the highest quality, but it does have a few things to recommend it. Dinah herself gives a nice intro, during which we get a brief glimpse of the show’s other guests, which include Henry Winkler and the great Nancy Walker. (Nancy Walker! Are you there, Tommy V?) And then we get to see 85-pound David Bowie absolutely belting out “Five Years” backed by his Plastic Soul touring band, who give the song a little different flavor than the Spiders did.

So anyway, without further ado:

In the news today

In the news today, this guy attempted to board a plane in Pakistan with “electrical circuits in his shoes“: 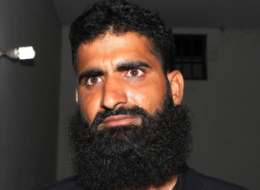 And I’m sorry, but I have to ask: what the hell does he have in his beard?

And here’s another: live updates from the home office. I am currently stuck in my desk chair because my cat The Precious has decided she wants to sleep in my lap, and she kind of calls the shots around here. But I do happen to have my camera right at hand. 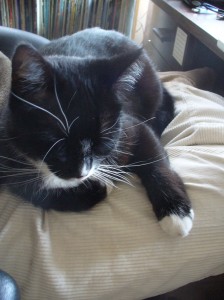 Yes, that’s right, cat pictures: last resort of the desperate blogger. It’s come to that. Who knows where we’ll be by the end of the day?

Well, here’s one way for me to get that number up: just piggyback on my friends at Dangerous Minds, who often write about the things I want to write about before I even know about them. Why not go right now and read this entry about a live version of Lou Reed’s Metal Machine Music?

A Case of the Mondays

So here we are: It’s May 10, 2010. (5/10/10: nice neat numbers, those.) The big 5th blogiversary is tomorrow. The comments stand at 529 (thanks to everybody who pitched in, this part went much better than I expected), with the number of entries lagging sadly behind at 494. So what do I do? Post every thought I have today, Twitter-style, to try and get the number up? Fudge the math and hope nobody notices (which nobody will, especially if I delete this entry before anybody reads it)? Or just forget about the numbers and be happy with what I’ve got? I haven’t made up my mind yet; I guess we’ll see what happens.