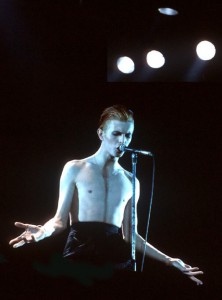 “Don’t talk of dust and roses
Or should we powder our noses…”
—D. Bowie, “Big Brother”

Among the things I’ve learned from Marc Spitz’s Bowie is that if you want to weigh 85 pounds like David Bowie did in 1984, you should try a strict diet of

cocaine, coffee, Marlboros, red and green peppers and whole milk from the carton

In fact cocaine is one of the more important characters in the book, David’s constant companion throughout the mid-70s, a key contributor to the making of Diamond Dogs, Young Americans, and Station to Station, just for starters. I was surprised to find that it didn’t get its own entry in the index, although there are 21 entries under “Bowie, David, cocaine addiction of”—not to mention 11 more under “drug-induced paranoia and psychosis of,” which is itself reason enough to think twice about trying the David Bowie Diet. I myself have always been terrified of cocaine, in part because of what it did to David Bowie while helping him make some of the greatest music ever recorded.

Spitz seems to find it similarly inspirational. Several of the better passages in the book are on this subject, like this one:

I associate certain rockers with certain drugs. When I think of Sid Vicious, I think of heroin more than I think of, say, the bass guitar. I love the Pogues, but when I think of Shane McGowan, I think of streams of whiskey. I associate certain rockers with certain drugs mostly when I am actually consuming those drugs. There’s an old punk rock album by a Los Angeles eccentric named Black Randy (and his band the Metro Squad) entitled Pass the Dust, I Think I’m Bowie (Randy re-creates the Hunky Dory sleeve on the cover). When someone is passing me the disco dust, I don’t necessarily think that I am Bowie, but I certainly have thoughts about Bowie. When the Beastie Boys acted like they still did coke, they thought of Bowie. You may recall this lyric from 1989’s “Car Thief” (from Paul’s Boutique, still their best record): “You be doing nose candy on the Bowie coke mirror/My girl asked for some but I pretended not to hear her.”

They actually make Bowie coke mirrors. I bought one on eBay UK. But since I don’t do coke anymore, I gave it to a girlfriend as a gift. She uses it as a compact.

Although there’s no way to measure this in any forensic sense, it’s wholly possible that David Bowie did more cocaine in the mid-1970s than anyone else in popular culture: the Eagles, Elton John, the Stones, Rick James, Oliver Stone, Hollywood Henderson or Julie Your Cruise Director.

By 1973, cocaine, long a recreational substance and status symbol with an extensive history of glamour, was so firmly entrenched in the culture that President Nixon declared war on the cocaine cowboys importing it from Colombian killing fields in private planes and disseminating it throughout the cities and suburbs until coke abuse took on the properties of a biological epidemic. Disco swingers wore “Coke Adds Life” pendants, and 18-karat gold spoons against their hairy chest or perfumed cleavage. Consumption was often done in restaurants and bars with the same élan one would use to sample from the wine list. As late as 1974, many people weren’t convinced it was at all addictive.

“So much publicity has gone out on heroin that people don’t want to get started on it,” Irwin Swank of Chicago’s Bureau of Narcotics is quoted as saying in a Newsweek cover story on the cocaine craze. “But you get a good high with coke and you don’t get hooked.” Mr. Swank, clearly a glass half full kind of Narco.

Or, finally, this one:

While planning the follow-up to Young Americans, Bowie would sit in the house with a pile of high-quality cocaine atop the glass coffee table, a sketch pad and a stack of books. Psychic Self-Defense by Dion Fortune was his favorite. Its author describes the book as a “safeguard for protecting yourself against paranormal malevolence.” Psychic Self-Defense‘s instructions (“Sever all connections with suspected originators”) seem like a paradigm for the isolated and suspicious mode in which Bowie conducted himself during this period, except, of course, for one of Fortune’s key tenets: “Keep away from drugs.” Using this and more arcane books on witchcraft, white magic and its malevolent counterpart, black magic, as rough guides to his own rapidly fragmenting psyche, Bowie began drawing protective pentagrams on every surface.

“It was very speedy coke,” [Glenn] Hughes says. “David never slept. Never slept. He was in a coke storm. We would be up three or four days at a time. I’d leave and come back and continue the same conversation we left off.”

“I’d stay up for weeks. Even people like Keith Richards were floored by it,” Bowie would later recall. “And there were pieces of me all over the floor.”

Well, yes…when Keith Richards thinks you’re overdoing it on the drugs, it may be time to get some help.