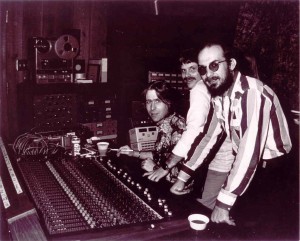 This is the best picture I could find of Cherokee Studios. None of these people are Bowie or Sinatra, though one of them is Del Shannon.

I’ve been making my way at a slow but measurable pace through Marc Spitz’s biography Bowie, and today’s fun was the 1975 meeting of Bowie and Frank Sinatra.

One day Frank Sinatra’s people showed up to check [L.A.’s Cherokee Studios] out. Sinatra was looking to to begin recording his post-retirement comeback album (released in 1980 as the triple album Trilogy) and had heard about Cherokee. At first the notion of Sinatra’s arrival was intimidating.

“They told us, ‘Don’t speak to him unless he speaks to you. Only call him Mr. Sinatra,’ ” [Cherokee co-owner Bruce] Robb says. ” ‘Don’t ask him if he needs a mic check. He’ll just walk in and do what he pleases when he pleases.’ ” When the great man actually arrived, he was as friendly and sociable as possible, entertaining Bowie, his band and the Cherokee staff with road stories and gossip.

“They became great friends,” Robb says of Bowie and Sinatra, “hanging out in the lounge. David sang harmony on one of Sinatra’s tracks, and Sinatra listened to a version of Bowie’s “Wild Is the Wind.’ ” Based on Sinatra’s enthusiasm for the track, Bowie was inspired to include what might have seemed an odd choice (a middle-of-the-road ballad sung unironically amid mutant Euro-funk and lyrics about blow and the occult) as the record’s closing track.

Which reminds me, in Sinatra-related news, the Cal Neva resort in Lake Tahoe shut down its casino operations this week. The Cal Neva was famous/infamous for a number of reasons, but in yet another example of my oft-noted laziness, I will just quote the Chronicle‘s story on the subject:

Sinatra owned the Cal Neva from 1960 to 1963 during its heyday, drawing fellow Rat Pack members [Dean] Martin, [Sammy] Davis and Peter Lawford, and stars such as Marilyn Monroe, Joe DiMaggio and Juliet Prowse.

Monroe spent her final weekend at the Cal Neva before she died of a drug overdose in Los Angeles in August 1962. The small cabin where she stayed still stands and is part of a tour offered by the resort.

Sinatra renovated the Cal Neva, adding the celebrity showroom and a helicopter pad on the roof. He used tunnels to shuffle mobsters and celebrities beneath the resort so they wouldn’t be seen by the general public, said Carl Buehler, a bartender who leads tours at the resort. The tunnels were built in the late 1920s so liquor could be smuggled in during Prohibition, he said.

You can read the whole thing here.

And finally, I can’t resist sharing this other example of a Bowie/Sinatra intersection, which I found on the BBC’s Web site:

With one of the strangest lyrics ever to have troubled the charts and a towering chorus, “Life On Mars?” sounds like a cross between a Broadway musical and a Salvador Dali painting. The song was originally released on Bowie’s 1971 album Hunky Dory, but that LP failed to sell as well as Bowie had hoped and “Life On Mars?” had to wait until 1973 for a single release, by which time Ziggy Stardust had made him a star.

The song strongly resembles Frank Sinatra’s “My Way” – it has identical chords – and with good reason. Back in 1968 Bowie had written English lyrics for a French song called “Comme, D’Habitude”, calling his version “Even A Fool Learns To Love.” It was never released, but soon afterwards Canadian songwriter Paul Anka heard the original version, bought the rights and rewrote it as “My Way”. Bowie recorded “Life On Mars?” as a Sinatra parody in anger at having missed out on a fortune, although the Hunky Dory liner notes state that the song was merely “inspired by Frankie.”

Maybe one of these days a former Cherokee engineer will be cleaning out his basement and find forgotten tapes of a late-night Bowie/Sinatra recording session…Sinatra sings “Life On Mars?”, Bowie takes lead on “My Way,” then maybe they duet on “I Get a Kick Out of You,” David snorting audibly in the background as Frankie croons “Some get a kick from … cocaine.” “Rock’n’Roll with Me” is playing on my stereo right now, and can’t you just hear Sinatra jiving on “I would take a…foxy kind of stand”? Just imagine what he’d do with “Rock’n’Roll Suicide”…or not. That may be a bridge too far.

Well, I could go on all day like this, but it’s almost quittin’ time, and the bloggers’ union is very strict about these things. More on these and related subjects next time.