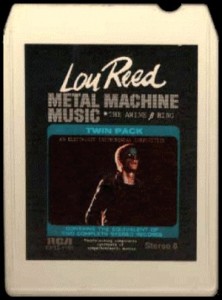 So of course I had to go on Amazon and see if it was in print, only to discover that it was readily available for the low, low price of $5.99 (less, I believe, than it cost upon release in 1975). And then I was compelled to add it to my collection, and for weeks it sat there on my desk, sneering at me. “Chickenshit,” it would whisper, “you can’t handle what I have to dish out.” I suspected that it was right, and furthermore suspected that in true Warholian fashion, MMM was meant to be admired as a concept rather than actually listened to. But at some point I had to face up to reality and play the thing. Here are my notes from the experience:

1:09 Pressed “Play” on the machine. Initial impressions, not so bad. No worse than Stockhausen or that other shit I was forced to listen to in that “Electronic Music” class at UCSC. A lot going on at a lot of different frequencies. Information-rich if nothing else.

1:18 Starting to grate a little bit. Of course, this album was interpreted by many, including Lester Bangs, as a great big “fuck you” to just about everybody, including record companies, music fans, music critics, and ultimately Lou Reed himself. But in an interview that appears in the book, Lou claims to love the album:

There are about seven thousand different melodies going on at one time or another, and each time around there’s more. Like harmonics increase, and melodies increase, in a different combination again. I don’t expect anybody with no musical background to get it. I took classical piano for fifteen fucking years.

1:24 I notice that Johnny the cat, who until recently was sprawled in his usual blissful afternoon slumber, is now sitting upright with his ears twitching. And this is a cat who is quite accustomed to sleeping through whatever horrible noise I blast through the stereo. Coincidence? Perhaps, but I wouldn’t be surprised if any local dogs are on alert as well.

1:28 Beginning to feel kind of tense. This is probably no coincidence either. Quoth the Lou:

There’s certain frequencies that it’s illegal to put on a record. The masterer can’t put them on, and they won’t, and you can’t record it. But I got those frequencies on this record. I tested the thing out at shows during intermission. We played it very softly to see what would happen. Which was exactly what I thought would happpen: fights, a lot of irritation…it was fabulous, I loved it.

1:37 Starting to feel impulse to kill self and/or others. May have to bail out of this experiment for sake of personal safety. Mental picture of head exploding Scanners-like. Losing will to…form…sentences.

1:41 Flipping through Psychotic Reactions and came across this:

As far as Metal Machine Music goes, I listen to it all the time, but I’ll never forget what Howard Kaylan told me Lou said to him after unsuccessfully trying to sell the layers-and-layers-of-sonic-frequencies concept (which was only a speed trip in the first place) to Flo and Eddie: “Well, anybody who gets to side four is dumber than I am.”

And that clinched it; I was not going to risk brain damage just to prove a point. I aborted Project Metal Machine and put on some Van Morrison to soothe my jangled soul. Later I included MMM in a shuffle of five CDs and was able to get through all of the tracks that way. Now it will find its rightful place on the shelf between Sally Can’t Dance and Coney Island Baby, where it can’t do anyone any harm.

1. The second, by the way, is entitled “The Greatest Album Ever Made.”