Death, Rebirth, the Universe, and Everything 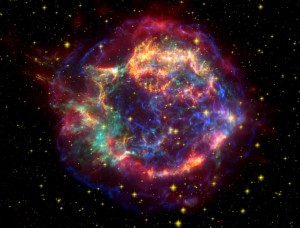 Doing research for yesterday’s post, I came across an amazing piece in Wired (from whence I stole the gorgeous picture at the top of this page, which I honestly believe in every legal sense to be in the public domain, as most NASA photos are). It’s called “Baby Neutron Star Found Inside Supernova Remnant,” and it starts like this:

Scientists have finally identified the mysterious source of X-ray emissions at the center of our galaxy’s youngest supernova: Inside the remains of Cassiopeia A sits a baby neutron star surrounded by a thin layer of carbon dioxide.

That’s right: A new star is born from the remains of a dead star. It’s just too metaphorically precise, isn’t it? Some might see this as evidence of a benevolent deity, or intelligent design, or some such thing; but it reminds me of the Babel fish:

The Babel fish, said The Hitch Hiker’s Guide to the Galaxy quietly, is small, yellow and leech-like, and probably the oddest thing in the Universe. It feeds on brainwave energy not from its carrier but from those around it. It absorbs all unconscious mental frequencies from this brainwave energy to nourish itself with. It then excretes into the mind of its carrier a telepathic matrix formed by combining the conscious thought frequencies with nerve signals picked up from the speech centres of the brain which has supplied them. The practical upshot of all this is that if you stick a Babel fish in your ear you can instantly understand anything said to you in any form of language. The speech patterns you actually hear decode the brainwave matrix which has been fed into your mind by your Babel fish.

Now it is such a bizarrely improbable coincidence that anything so mindboggingly useful could have evolved purely by chance that some thinkers have chosen to see it as the final and clinching proof of the non-existence of God.

The argument goes something like this: ‘I refuse to prove that I exist,’ says God, ‘for proof denies faith, and without faith I am nothing.

‘But,’ says Man, ‘The Babel fish is a dead giveaway, isn’t it? It could not have evolved by chance. It proves you exist, and so therefore, by your own arguments, you don’t. QED.’

‘Oh dear,’ says God, ‘I hadn’t thought of that,’ and promptly vanishes in a puff of logic.