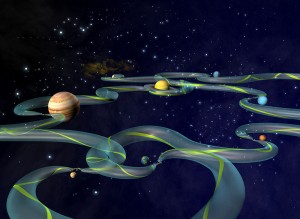 A NASA artist's conception of the Interplanetary Transport Network.

The mutation from terrestrial to interstellar life must be made, because the womb planet itself is going to blow up in a few billion years…. Planet Earth is a stepping stone on our time-trip through the galaxy. Life has to get its seed-self off the planet to survive….

There are also some among us who are bored with the amniotic level of mentation on this planet and look up in hopes of finding someone entertaining to talk to.

Last night’s viewing was Werner Herzog’s The Wild Blue Yonder, a bizarre mindfuck of a movie combining found footage, video of scuba diving in Antarctica and a space shuttle mission, and Brad Dourif playing an alien whose narration ties the whole thing together. Herzog calls this science fiction, though he claims his previous exposure to sci-fi consisted of one of the “Star War” movies and one of the movies with “Dr. Spock” in it.

There was also some actual science in it, including a monologue by one Martin Lo, who explains a concept that the movie calls “chaotic transport” (Wikipedia calls it the “Interplanetary Transport Network,” which is a much less catchy phrase). Apparently, this idea drastically reduces the amount of energy needed for interplanetary travel by making use of the precisely calculated interlocking orbits of celestial bodies and of something called “Lagrange points,” which are

…locations where trajectories through space can be redirected using little or no energy. These points have the peculiar property of allowing objects to orbit around them, despite the absence of any material object therein.

Trippy. If I’m understanding this correctly, it means that if you do some really complicated math you can figure out where to put a spaceship so that it will more or less be carried around the solar system on a sort of interplanetary conveyor belt.

This is a real thing, though in the movie it’s applied to intergalactic travel, which to all appearances is not; as Herzog points out, just traveling to the nearest star at the fastest speed yet reached would take something like 120,000 years. This is too bad, because we’re unlikely to find anyone terribly interesting to talk to in this solar system. But if we can figure out chaotic transport, maybe we can figure out how to exploit some deus ex machina like wormholes or other dimensions to get around the universe. Young people with undamaged brains, I’m looking at you….

← The Day the Music Tortured ← Death, Rebirth, the Universe, and Everything