Better than a cold bath with someone you dislike

Highlight of the week, the month, possibly the year: a whirlwind trip to LA to catch a rare appearance by the Jazz Butcher Conspiracy. This was the third time I’ve seen the Butcher, who is mostly calling himself Pat Fish these days, but the first time I’ve seen him together with the great Max Eider, who it turns out is a quite indispensable part of the equation. An extra special bonus was the presence of Kevin Haskins of Bauhaus/ Love and Rockets fame on drums.

Everyone is aging rather gracefully. Mr. Fish himself resembles a graying movie star, somewhat faded but effortlessly charming. Max was mysterious and somewhat oddly mannered behind his shades, but still with golden fingers and a highly underrated voice. Kevin did a real job of work on the skins, pounding out the beat to classics like “Roadrunner” and “Caroline Wheeler’s Birthday Present.”

It would have been hard to ask for much more, except maybe that everyone would have shut up when the band played “Drink,” my all-time favorite. I’ll never understand why people insist on talking over music they’ve paid money to hear. It’s a good thing I didn’t have a gun in my hand, or I’d be blogging from prison right now, and I wouldn’t have gotten to hear “Southern Mark Smith,” “Zombie Love,” or “Who Loves You Now.” And that would have been too bad.

Big ups to Cecil Vortex, without whose participation this escapade wouldn’t have been possible. He is a prince among men. 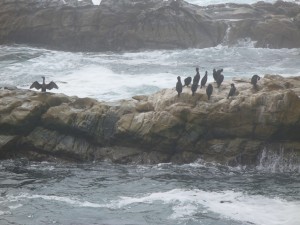 One bird preens while the others gossip.

The Most Interesting Man in the World

With all due respect to the “Stay thirsty, my friends” guy, in my opinion the most interesting man in the world right now is filmdirektor Werner Herzog. Perhaps best known in this country for the documentary Grizzly Man, Herzog has a long and distinguished resume including six feature films starring honest-to-God madman Klaus Kinski, about whom Herzog also made the doc My Best Fiend.

What makes Werner Herzog the most interesting man in the world? So many things—here is a quick bulleted list: