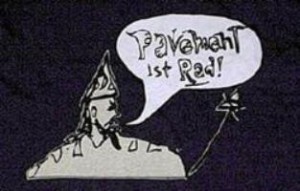 The whole thing comes wrapped up in a groovy package with an informative and nice-smelling booklet. My only complaint is that the back-cover cartoon with the wizard exclaiming “Pavement ist Rad!” is nowhere to be found here, and that’s just wrong.

Anyway, I figured this gave me an excuse to bust out my own sort of bonus track, this previously unpublished review from 1995.
.
.
Pavement, Wowee Zowee

Pavement found itself in a quandary at the beginning of 1995, having achieved somewhat of a commercial breakthrough with 1994’s Crooked Rain, Crooked Rain. They clearly lived in fear and dread of the kind of massive success that would alienate their cult fan base, as evidenced by a willfully obnoxious Tonight Show butchery of their sort-of-hit single “Cut Your Hair.” At the same time, their music harbored a fiercely persistent pop tumor that could not easily be excised without killing the patient.

Wowee Zowee is their resolution of this paradox. It takes a careful, calculated step backward from the brink of mass acceptance without resorting to mere antisocial noisemongering (Steve Albini does not produce). The 18-song album is frontloaded with slow, dark, mellow songs, with the exception of the single “Rattled by the Rush,” itself a lurching, goofy, Zeppelinesque piece unlikely to turn up in MTV’s “Buzz Bin” anytime soon. Then it starts jumping around wildly, from punk rock to pseudo-country to gothic drone to pseudo-funk to art-rock epic.

But you know what? It works. By loosening their grip on the reins, Pavement has allowed their sound to grow organically in numerous new directions without sacrificing that underlying whatever-it-is that makes them Pavement. They have always been and continue to be a guitar band, but new instruments (piano, theremin, pedal steel, cello) are mixed in artfully. Whatever genre they seem to be dabbling in is Pavementized, tamed and made to serve the whole. The whole affair feels loose, unhurried and even jolly, in pleasant contrast to the legion of cookie-cutter Tortured Artists who currently litter the rock landscape. If Crooked Rain was Pavement’s Abbey Road (and it was, believe me), this is their White Album: sprawling, self-indulgent, stylistically incoherent, brilliant.

What’s more, Pavement seems, perhaps inadvertently, to have discovered the secret of Time Control. At sixty minutes the album, if listened to straight through, seems more or less eternal. (If you don’t like it, this would be a bad thing; if you do, it’s like a bottomless jar of cookies.) A short song (take for instance “Black Out,” 2:10) feels two or three times as long as it actually is; when they do write a truly long song (“Half a Canyon,” 6:08), it feels positively symphonic in scope. This could have practical application in the future, perhaps replacing suspended animation in interstellar travel.

Earlier in 1995 Might magazine’s Paul Tullis named Pavement “World’s Greatest Rock Band,” and I have to go along with him, perhaps modifying the title to “The Last Great Rock Band.” Over the last few years the genre’s champions have been disappearing all across the spectrum, from the Pixies to the Grateful Dead. Only quixotic contrarians like Malkmus and friends still think rock is worth saving, and they themselves would never admit as much; but, miraculously, they have done it, at least for now.