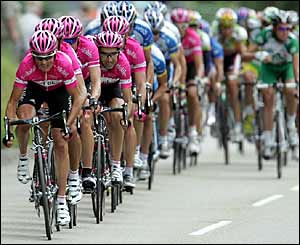 T-Mobile rode well in Stage 8; too bad about those uniforms.

Somehow in the last entry I got my stages mixed up. The stage with the Côte de Dobel, Côte de Bad-Herrenalb, Côte de Nachtigal, Côte de Zimmerplatz, and Col de la Schlucht—that was Stage 8, not Stage 9. It’s probably my own fault, but I’m going to shift blame onto the official Tour de France Web site, which is the worst-organized, least-intuitive major site I’ve ever seen. It’s such a disaster that there’s not even a clear home page for you to bookmark. But I digress.

The big climb at the end of Stage 8 had the desired effect, splintering the peloton and creating a tense, wide-open situation. The stage was won by a Dutch rider named Pieter Weening—yes, that’s right, Pieter Weening—who took off from the pack at the foot of the Col de la Schlucht and held on to beat Andreas Klöden literally by millimeters. But the real story in the stage was the relative strength shown by Klöden and the rest of T-Mobile, and the relative weakness shown by Lance Armstrong’s Team Discovery.

Armstrong was unconcerned when Weening sprinted out. But when Klöden, who had been invisible in the first week of the Tour, took off like he had a rocket in his ass, that got Lance’s attention. The next to attack was Klöden’s teammate Alexandre Vinokourov, one of the guys Armstrong is most concerned about. When that happened, Armstrong looked around for help and found that he was alone. The rest of Team Discovery, usually the very model of efficiency and dependability, was nowhere to be seen.

Armstrong was forced to chase down Vinokourov on his own, which he did, but he wasn’t too happy about it. “We have some talking to do tonight,” he said drily in a post-race interview, rubbing his eyes and looking exhausted.

Does this mean that Armstrong is vulnerable? Hard to say. This stage may have just been a fluke; you have to think that Discovery will get its act together and return to form in Stage 9. But T-Mobile has three very strong riders in Vinokourov, Klöden, and Jan Ullrich. If they ever decide who their leader is and start working in a coordinated fashion, they’re going to make things interesting.

If only they could do something about those ridiculous pink uniforms. I honestly don’t see how you can ride in a getup like that. The only thing sillier than T-Mobile’s uniform is the polka-dot jersey awarded to the “King of the Mountains,” the rider who performs best in the mountain stages. If you can put that thing on, shave your legs, and still feel macho, well…you’ve got to love yourself for that.