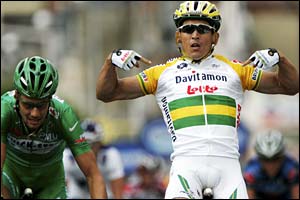 Robbie McEwen points to his erect nipples after winning Stage 5.

Stage 5, 183 kilometers from Chambord to Montargis, was another flat stage that had no real impact on the overall scheme of things. Four riders broke away from the peloton early in the day but were easily caught. There were a few minor crashes that didn’t affect anyone’s finishing time. And the stage was won by sprinter Robbie McEwen, who pumped his fists and pointed to his chest in an almost NBA-like display of self-love. McEwen had a chip on his shoulder because he’d been penalized for head-butting Stuart O’Grady in Stage 3; he rather childishly insisted that O’Grady had started it. Maybe so, but McEwen was the one who was caught on video flagrantly interfering with O’Grady’s charge toward the finish.

So much for that. This was one of those stages where you can safely let your mind wander. I spent a lot of time digging the scenery, which was particularly lovely on this overcast day in central France. But I also kept thinking about Dave Zabriskie’s crash in Stage 4, which just keeps getting weirder. A closer study of the replays showed that he didn’t make contact with another rider or with the barrier; he just fell. His team manager speculated that his knee might have bumped into his elbow, which is an odd thing to suddenly have happen right at the end of a 42-mile bike race.

In fact, if you’re a fan of conspiracy theories, there’s plenty of space for one here. Consider:

• Right after the race, Zabriskie said he felt like he’d been elbowed. Later, coming out of the hospital, he looked dazed and said he really didn’t know what had happened.

• A mysterious figure leapt out of the crowd and over the barrier just after Zabriskie hit the ground.

• The crash occurred just over 1 kilometer from the finish. If it had been within 1 km, Zabriskie according to rule would have been awarded the same time as the rest of his team. Instead, he was stuck with his actual time, which cost him almost a minute and a half. That may not sound like much, but a minute and a half means a lot in the Tour.

• And, of course, the guy who crashed just happened to be the guy wearing the yellow jersey and clinging to a two-second lead over Lance Armstrong.

Am I suggesting there was some funny business here? No, I’m just saying that the picture as a whole is very suggestive. Make of it what you will; I am falling behing in my viewing and must be off.