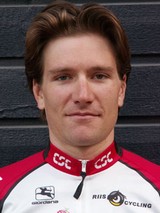 This is how dumb I am—I only found out today that Dave Zabriskie, who won the first stage and continues to wear the yellow jersey, lives in Berkeley. This makes me want to root for him, which is pointless, because he has pretty much zero chance of winning. It’s not his job to try to win; his job is to provide support for his team leader, Ivan Basso.

The Tour is weird that way. Each team is organized around one guy who is thought to have the best chance of winning the race; the other eight team members are there to help him, mainly by riding in front of him and giving him someone to draft off. (My, that’s an awkward construction. “Off of whom to draft”? Well, never mind.)

It’s usually clear who that guy is on each team, although rivalries do develop within teams. Apparently one is going on right now on the T-Mobile team, where Jan Ullrich is the nominal leader but some of the riders think Russian Alexandre Vinokourov is the best bet.

So I suppose it’s possible that if Zabriskie holds on to the yellow jersey for a while longer, Team CSC will consider demoting Basso and making Zabriskie the guy. I have to say that in my limited experience, I’ve seen nothing from Basso to make me think he’s got what it takes to win the Tour. Mainly, whether it’s Zabriskie, Basso, Ullrich, Roberto Heras, Iban Mayo, or whomever, I’d like to see someone step up and make this thing interesting in the last few days. Last year was Lance Armstrong’s coronation as the first six-time winner, and that was fine; this year, it’d be nice to have some drama.

Oh, I almost forgot, Stage 3, like Stage 2, was won by Belgian Tom Boonen in a sprint to the finish. Again, this has no impact on the overall race, because Boonen has no intention of trying to win the Tour. His goal is to take home the green jersey, which goes to the best sprinter. Stage 4 ought to be a little more intense: It’s a 42-mile team time trial in which Armstrong’s Discovery team will have a chance to boost him into the race leadership. Last year this team, then called the U.S. Postal Service, put on an astounding display of power and discipline in the team time trial, more or less assuring Armstrong of the victory. This year, Discovery is missing two key cogs: Floyd Landis, who jumped to the Phonak team, and Viatcheslav Ekimov, who is injured. So we’ll see. In fact, I’m going to see right now, because I have Stage 4 waiting on the DVR already. More later.