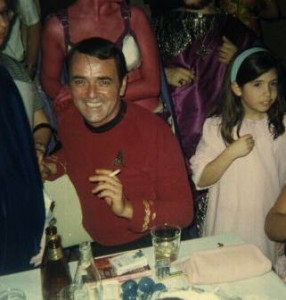 James Doohan will be drinking Scotch and smoking a cigarette in heaven tonight.

Today’s stage of the Tour de France was cancelled due to the death of James Doohan, who played Scotty on Star Trek.

Psych! No, they went ahead with the race, but for the fourth stage in a row, there’s not much to report except that:

A) Lance Armstrong did not fall off his bike and was not poisoned by a vengeful French chef or punched in the pancreas by a wine-crazed fan. Nor did a giant hand reach down from the sky and flick him into a crevasse. He was not beamed up into a starship that had traveled back in time to prevent some dire future event. If these things continue to not happen for the next three days, Armstrong will win his seventh Tour de France.

B) Somebody who’s been riding anonymously in the peloton all this time had a chance to grab some glory for himself, his team, and his country by winning the stage. In this case it was Marcos Serrano, a Spaniard who rides for Liberty-Seguros.

C) The TV coverage continued to focus less and less on the race and more and more on the scenery, the in-jokes among the broadcasters, and just about anything else. Here’s an exchange that took place between commentators Phil Liggett and Paul Sherwen concerning a roadside crop design in the shape of a bicycle:

Liggett: “I’ll never know how they make the wheels so perfectly round.”
Sherwen: “That’s extraterrestrials done that.”
Liggett: “Was it?”
Sherwen: “Oh yeah, definitely.”

For the next three days, expect a non-stop Lance lovefest. And what the hell, he’s earned it. A couple weeks back, one commentator compared winning seven Tours to hitting a thousand home runs, and I think that’s about right. He’s been so good, so consistently, for so long that he’s broken the spirits of everyone else in his sport.

Armstrong hasn’t shown a single moment of doubt or weakness in this year’s race, and if there had been little thought bubbles over the peloton in Stage 18, a lot of them would have said this: “Jeebus, I hope Lance retires after this year like he says he’s going to. Maybe then I’ll have a chance to win. I wonder what’s for dinner tonight?”