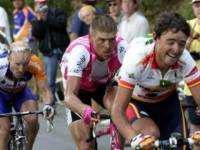 If there’s one thing that still perplexes me about the Tour, it’s this: Everyone connected with the race, including the actual competitors, always seems to be falling all over themselves to declare a winner as soon as humanly possible.

As of yesterday, 15 of the 21 stages had been completed, a full week’s riding remained, and Lance Armstrong led his closest rival, Ivan Basso, by less than three minutes. And yet all the coverage assumed that an Armstrong victory was a foregone conclusion.

Including mine; I said yesterday that Armstrong is a mortal lock, and indeed it is highly unlikely that anyone will beat him. But it’s one thing for me to say it and another for Basso himself to say, as he did yesterday, “I’m not stupid. He’s strong. It’s finished.”

Memo to Mr. Basso: Dude, don’t give up so easily! If you take that attitude, you certainly are gonna lose. Meanwhile, Jan Ullrich was quoted thusly: “My aim now has to be the podium [top-three finish]. I can’t expect to do any better.”

I hate to say this, but…is it being in France that makes everybody so eager to surrender? Is it something in the water? Maybe these guys are just being realistic, but you’d like to see them believe in themselves a little bit. Isn’t that what we have professional athletes for in the first place?

Anyway, Stage 16: The stage winner was Oscar Periero, and good for him, because he’s ridden his ass off in several stages but kept coming up short until today. Armstrong rolled along very comfortably, and none of his main rivals made a peep. The most exciting moment of the day was when Andrey Kashechkin was whacked in the face by a fan at the side of the road, apparently with a blue noisemaking stick. With blood dripping from his nose, Kashechkin turned around and rode against the direction of the race—which you most decidedly are not allowed to do—looking like he wanted to find the fan in question and go all Ron Artest on him.

And then the TV coverage cut away and never mentioned the incident again. The only mention of it I could find on the Web was on CNN.com, which said that Kashechkin was “struck in the face by a spectator.” Roger Legeay, Kashechkin’s team manager, is quoted as saying “He received a punch in the face.” So maybe he was hit by a fist rather than a noisemaker, which makes rather more sense given the severity of the injury.

How sad is it that this is the big story of the day? Wouldn’t it be much better if there were actual Tour news to report? Basso, Rasmussen, Ullrich, I’m begging you: Suck it up, make some noise, add some drama to these last five stages. What do you have to lose?