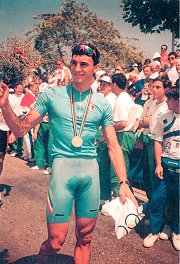 A mostly, but not entirely, flattering photo of the late Fabio Casartelli.

This was a strange day for the Tour de France because it was the tenth anniversary of the death of Fabio Casartelli, the third and most recent Tour fatality. Casartelli was descending the Col de Portet d’Aspet on July 17, 1995 when there was a crash in front of him. He was thrown from his bike and whacked his head on a concrete block at the side of the road, hard enough to cause a hemhorrhage that killed him.

The other two Tour deaths, in case you’re curious, were Tommy Simpson, who died of (possibly amphetamine-related) heart failure in 1967, and Francesco Cepeda, who “plunged into a ravine” in 1935. It’s serious business, this bike racing.

In Casartelli’s honor, Tour planners arranged for today’s Stage 15 to pass his memorial on the Col de Portet d’Aspet, and many of the riders were wearing “Fabio” wristbands. Before the stage, the TV commentators were saying that Lance Armstrong, who was Casartelli’s teammate in 1995, would make a special effort to win Stage 15. But as it turned out, it was Armstrong’s sidekick George Hincapie who crossed the finish line first, winning the first Tour stage of his 11-year career.

Hincapie joined an early breakaway of 14 riders that led by almost 20 minutes at one point. By the time they reached the finish, four first-category climbs and one beyond-category climb later, only Hincapie and Oscar Pereiro of the Phonak team remained. In the end, Pereiro appeared to concede the stage to Hincapie, unwilling or unable to make one last push at the end of a very long day.

Armstrong himself again rode much of the day in the company of Ivan Basso, who moved into second place overall on the strength of a very solid performance. Basso is now unquestionably the guy to watch if you want somebody to challenge Lance in the last week of the Tour. Mickael Rasmussen rode reasonably well but still lost time, falling to third place 3’09” behind Armstrong. Rasmussen is looking less and less like a threat and may not even be trying to win the Tour, aiming instead for the King of the Mountains title.

In fourth place now is good ol’ Jan Ullrich, 5’58” back. Ullrich keeps falling a little further behind in time every day, but keeps moving up in the standings because everybody else is doing worse. God love him, Ullrich doesn’t have the speed to hang with with Armstrong and Basso but he simply will not quit. He just keeps coming on like a Terminator in pink spandex.

Tomorrow is the second and final rest day, and after meditating for several hours I will publicly predict the top five finishers, in order, with time deficits. Then I will be flying to Vegas to win the money to attend next year’s Tour in person. Who wants to go?