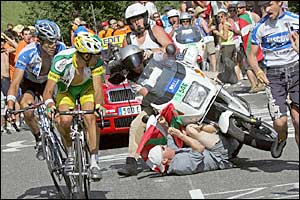 Among those recuperating today will be George Hincapie (far left), Oscar Pereiro (near left), and some dimwit who ran onto the course and got hit by a motorbike (bottom center).

You would think that, after riding 1152 kilometers (715 miles) in six days, the cyclists on the Tour would welcome a day off. But no, I am told that they don’t really want a rest day, that it throws off their rhythm. I don’t much care for the rest day either, because it reminds me that, to paraphrase Col. Kilgore, “Someday this Tour’s gonna end.”

Actually, on Sunday this Tour’s gonna end, as Stage 21 brings the peloton to Paris. Here’s what it will look like when they get there:

…duh, Lance Armstrong. Not a real exciting choice, I know, but you’d have to be an idiot to pick anybody else at this point. Lance has the form, the conditioning, the team, the strategy, and perhaps most importantly, the aura. Barring an injury or other act of God, Armstrong is a mortal lock to win his seventh Tour.

Second place will go to Ivan Basso of Team CSC, who will finish one minute and fifty-nine seconds behind. After looking very strong in the mountains, Basso is already in second with a time deficit of 2’54”. I figure he will gain some time at the beginning of the week and get close—agonizingly close—to Armstrong before falling back a little in Stage 20.

In third place will be Jan Ullrich of T-Mobile, 3’38” behind. Ullrich is currently in fourth place behind Mickael Rasmussen, but Rasmussen has shown signs of fading and the somewhat flatter stages this week are better suited to Ullrich’s style. I’m thinking Jan will have one really good day this week and pick up some time on Armstrong, but not enough to challenge for the crown.

I like Rasmussen to hang on for fourth place, about five minutes behind. He will probably be perfectly happy take his stage win and his King of the Mountains title—a.k.a. the polka dot jersey—and go home.

Fifth place, it says here, will go to Levi Leipheimer, say 30 seconds behind Rasmussen. Leipheimer has come on strong in the last week and is the star of the Tour’s best ad campaign, where a crew comes to interview him about his training but never gets to talk to him because he’s too busy training. (OK, I wouldn’t call these ads classic, but it’s a weak field.)

Also, the green jersey for the best sprinter will go to Robbie McEwen, because he is the goddamn devil; and the white jersey for best young rider will stay with Yaroslav Popovych, Armstrong’s heir apparent on Team Discovery.

One last prediction: If all these other predictions come true, I will be totally insufferable for at least a month and a half. This is the most reliable of all today’s many predictions. As Crispy Bacon might say, “It’s money in the bank.”