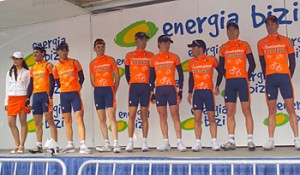 I should have my head examined for awarding these guys Best Uniform.

Since there’s no race today, I’d like to take a minute to award some prizes for the first 9 stages.

And now, the awards:

Best Crash:
This is a tie between David Zabriskie’s mysterious fall in Stage 4 and Christophe Mengin’s slam into the barrier in Stage 6. Both riders are now out of the Tour, and while Zabriskie’s crash had a greater strategic impact, Mengin’s affected not only himself but also a bunch of the riders behind him. A moment of silence, though, for the Tour hopes of Berkeley Dave, who went from wearing the yellow jersey, to lagging more than an hour behind the leaders, to out of the race in just a few days. Hopefully he’ll be back on Grizzly Peak real soon.

Best Uniform:
This is a tough one, because all the uniforms pretty much stink on ice. The slick navy blue of the U.S. Postal team has been replaced by the nondescript light blue of Team Discovery, and no one has stepped up into the breach. I’m going to have to give the nod to the bright orange of the Basque team, Euskaltel-Euskadi, mainly for lack of a better option.

Worst Uniform:
Hands down, the painful pink of T-Mobile.

Best Name, Individual:
This is another tough one, but for the opposite reason: There are so many lyrical and fun-to-say names among the multinational cast of characters. I have a soft spot for the aforementioned Alexandre Vinokourov, whose name trips easily off the tongue and shortens nicely to “Vino.” Some of Euskaltel’s Basque names are nice, like Unai Extebarria and Inigo Landaluze (“My name is Inigo Landaluze, and you killed my father. Prepare to die.”). Possible contenders Alessandro Spezialetti, Jaan Kirsipuu, Igor Gonzalez-Galeano, and Leon Van Bon are disqualified for having dropped out of the Tour. You could make an argument for David Loosli, Karsten Kroon, Janeck Tombak, Santiago Botero, Joost Posthuma, Fabian Cancellara, and of course Vladimir Karpets, who already knows what business he’s going to be in when his racing career is over. But I’m going to give the award to Angel Vicioso, whom I’ve never heard mentioned once during the race, but man, what a name.

Worst Name, Individual:
Well, let’s see. Wim Vansevenant has one of those names you get lost in after two syllables. Michael Boogerd…need I say more? Stage 8 winner Pieter Weening has two reasonable names that just don’t go well together. Alexandre Moos has a name that starts off well and ends up sounding like somebody’s fraternity roommate. Marcus Ljungqvist and Gorazd Stangelj suffer from major superfluous consonants. Wilfried Cretskens and Bram Tankink sound like the worst act the Borscht Belt ever produced. But I’m giving the prize to Rafael Nuritdinov, because I initially read his name as “Nurditinov” and didn’t stop laughing till just now.

Best Name, Team:
This one also goes to Euskaltel-Euskadi. I don’t know what it means, but it sounds great.

Worst Name, Team:
That would have to be Liquigas.

And, finally, the Leon Trotsky Invisible Man Award goes to Tyler Hamilton. An eight-time Tour veteran, Hamilton is out of the race this year after receiving a two-year suspension for blood doping. He has steadfastly maintained his innocence—which, of course, they all do—and the circumstances surrounding his suspension did seem a little fishy; but, jeez, who knows with these things. What I find curious is that Hamilton’s name has not been mentioned once in 800 hours of TV coverage, even to note his absence, even during an extensive discussion the other day of collarbone injuries. Hamilton, you may recall, was the guy who rode the entire 2003 Tour with a broken collarbone and came in 4th, making him everybody’s favorite feel-good story at the time. Now, I imagine, he’s watching the Tour alone in a dark room with a bottle of whiskey close at hand. Not that there’s anything wrong with that.