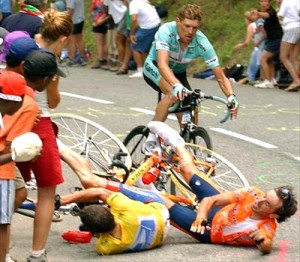 From the 2003 Tour: Lance Armstrong (in yellow) hits the deck; Jan Ullrich (top) worries about his hair.

I first started getting into it when I just happened to tune in on the day Lance Armstrong got his handlebars hooked on a spectator’s handbag. Or it might have been a shopping bag, I can’t quite remember…the point is, it was pretty damn dramatic watching Armstrong pick himself up and go on to win the stage. And pretty cool seeing the other riders follow Tour etiquette and slow up to let him back in it.

After that I started watching regularly and, at first, I mostly just got lost in the scenery. You can easily forget why you’re watching as the race rolls through the French countryside, all undulating hills, charming villages, and meadows dotted with cows and sheep.

But then they get to the mountains, and everything changes. In the mountain stages, the Tour is all about pain—who can endure the most and come out on top. In the long shots, as you watch the pitiful little humans struggle up the flank of some massive Alp or Pyrénée, many thoughts run through your head, but mostly this one: Better them than me.

And then you have the spectacle of the crowd. There is no crowd control to speak of at the Tour de France, and no practical way there could be with a field of play so long and narrow. There’s nothing at all to stop some yahoo from running out of the crowd and accosting one of the riders, and this has in fact happened.

In 1975 legendary cyclist Eddy Merckx was trying to win his sixth Tour when a French fan, upset that the Belgian Merckx might eclipse the record of 5-time winner Jacques Anquetil, leapt from the crowd and puched Merckx in the kidneys. Merckx finished the Tour, but the injury and the pain medication he took were enough to keep him from winning. This is why no one had ever won six tours until Armstrong did it last year.

On the mountain stages the riders are moving so slowly that the crowd swarms the course and only barely clears the way in time for the riders to come through. The racers have no choice but to have faith that the spectators will in fact get out of the way, and to endure whatever taunts, loogies, and foreign objects that fans choose to hurl their way.

That’s just the surface level; there’s also a whole universe of strategy that I don’t want to get into here. The Tour is a weird combination of individual and team sport that it’s hard for Americans to get our heads around, though it is worth the effort. We will get into all that later.

Anyway, I decided that this year I am going to cover the Tour from my living room. I’ve got the wireless Internet, the digital cable, the kittens, and a good supply of Peet’s coffee (which Lance Armstrong drinks every morning—word is he’s a fan of Major Dickason’s blend). Stage One is already starting, so I’m going to sign off for now.