The cable box had a meltdown overnight and had to be reset, so I missed this morning’s broadcast of Stage 5. No need for panic, though; everything’s OK now and I’ll be able to catch the expanded coverage at 9 PM.

So I used my extra time today to go to the gym and to watch Breaking Away, which has been sitting in my Netflix pile for a couple weeks now.

The first thing I noticed about this movie is how much star Dennis Christopher looks like Beck:

So what happened to this guy? In the 70s he was in Fellini’s Roma, Robert Altman’s 3 Women, and this. He was named one of the “Promising New Actors of 1979.” In 1981 he was in Chariots of Fire, and then…well, his resume includes things like 1987’s Alien Predator (a.k.a. Cosmos Mortal, a.k.a. Mutant 2, a.k.a. Mutant II, a.k.a. The Falling); 1991’s Dead Women in Lingerie; 1992’s Willing to Kill: The Texas Cheerleader Story; 1994’s Plughead Rewired: Circuitry Man II; and 1995’s Deadly Invasion: The Killer Bee Nightmare. Apparently he continues to work, though—last year, he played Joshua “Carrots” Beale in the New Zealand film The Ballad of Lucy Whipple, a.k.a. California Gold.

The second thing I noticed about Breaking Away is that Jackie Earle Haley is in it. In 1976, Haley played Kelly Leak, the biggest, toughest Bad News Bear, the one who rides a motorcycle and can slam the shit out of a baseball. In Breaking Away, made three years later, he plays Moocher, whose defining characteristic is that he’s short.

I say again, what happened? Did all those cigarettes he smoked while playing Kelly in three Bad News Bears films stunt his growth? You have to think that Jackie Earle Haley could bring a fairly lucrative lawsuit against the tobacco industry for damage to his career, which after 1979 got pretty spotty. He was in the Breaking Away TV series (the only one of the four friends in the movie to take the gig; Christopher was replaced by Shaun Cassidy); made four more films in the 80s; then landed roles in Gravedale High (1990), Dollman (1991), Nemesis (1993), Prophet of Evil: The Ervil LeBaron Story, and Maniac Cop 3: Badge of Silence (1993). After that, he dropped out of sight completely, hopefully of his own volition; he seems to be mounting a comeback, though, because his IMDB page lists two movies currently in production. Just for kicks, here’s a picture of him bald:

The third thing I noticed about Breaking Away was a brief appearance by P.J. Soles, credited by her full name, Pamela Jayne Soles. Those of you saying to yourselves right now, “Who’s P.J. Soles?”, obviously were not 14-year-old boys when Stripes came out. Here she is with Bill Murray: 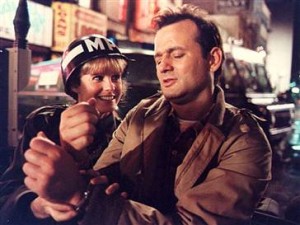 P.J. was one of Hollywood’s favorite babes for a while, with roles in Halloween, Carrie, and The Boy in the Plastic Bubble. Her career after Stripes in 1981 shows a similar arc to Christopher’s and Haley’s, with roles in things like Saigon Commandos, Alienator, B.O.R.N. (a.k.a. Merchants of Death), Mirror, Mirror IV: Reflection, and this year something called Pee Stains and Other Disasters. In her case I won’t say “What happened?”, because her shtick was always bubbly and cute (or in horror films, screaming and cute), and that’s not going to last you much past 30. She too continues to work, though, with roles in five movies in 2005.

Finally, the last thing I noticed about Breaking Away (Jesus, this thing has gotten long; I seem to have diarrhea of the blog today) was that it’s about a guy named Dave who recovers from a catastrophic wipeout to win the bike race of his life. Which brings us right back to the Tour de France. Is this a sign that Dave Zabriskie will recover from yesterday’s disaster and go on to unseat Lance Armstrong as Tour champion? I’m hesitant to go on record predicting such a thing, especially since, as I pointed out Monday, he’s not even the leader of his team. But if it happens, I fully intend to edit this entry to show that I did predict it.