In honor of Father’s Day, a picture of The Old Man I took in the Badlands of South Dakota: 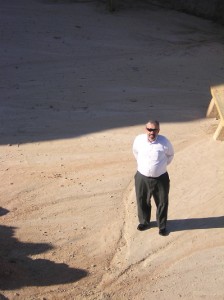 Kobe and Phil, (Temporarily) Together Again

I’ve been watching and reading the coverage of Phil Jackson’s return to the Lakers over the last 18 hours or so, and everyone’s making a big deal of how he’s going to coexist with Kobe. Which is a good question, given that after leaving the Lake Show Phil went public with his low opinion of Kobe as a human being. But the possibility everyone seems to ignore is that they won’t have to coexist, because the Lakers will trade Kobe’s ass.

Think about it: By dumping Kobe the Lakers could get rid of a cancer and bring in some serious talent in one fell swoop. Because of his marquee value, a lot of teams would be willing to ignore what a chump he is. How about…

• Kobe to the Sixers for Allen Iverson (probably won’t happen, given Philly’s attachment to Iverson and Iverson’s man-love for Mo Cheeks; but then again, Kobe’s a Philly guy)

• Kobe to the Cavs for LeBron James (sounds crazy, but Larry Brown’s about to take over in Cleveland, and he has a reputation for loving to make big deals)

• Kobe to Houston for T-Mac (that whole T-Mac/Yao thing isn’t working out so fantastic, is it?)

• Kobe to Denver for Carmelo, Nené, and Earl Boykins (just as a real “fuck you” to the Kobester on his way out the door)

• Kobe to Sacramento for Mike Bibby and Peja (Sac gets some box office, the Lakers get two options to work into the triangle)

So that’s my prediction: Kobe will not be a Laker at the start of next season. Remember you heard it here first. 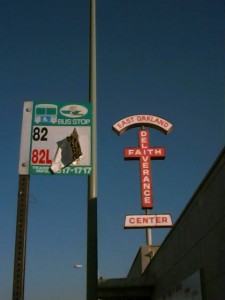 So tell me honestly…

How do you feel about this whole astrology thing? I myself don’t believe in it. Mostly. But every once in a while something leads me to wonder.

Like today, for instance, is the birthday of both Tom Jones and Prince. So I started looking around the Web to see if somewhere it said “Your Birthday Today: You are a sex machine to all the chicks.”

Which it didn’t. But I did find out that today is also the birthday of two showbiz types who are known to have very large penises—Dave Navarro (Jane’s Addiction guitarist) and Liam Neeson (Jedi Knight)—as well as Dean Martin. Was Dino well-hung? I can’t remember ever hearing one way or the other. But he certainly had a lot of self-confidence.

Palmer and the Dream of Wires

Like most people who came of age in the 80s, I always thought of Robert Palmer as a) the lead singer of Power Station and b) the guy who fronted that band of robotic models in the “Addicted to Love” video.

Turns out Palmer had a whole other career before that, a pretty interesting one. On his 1974 debut, Sneakin’ Sally through the Alley, he worked with members of Little Feat and the Meters to produce a slick, coked-up version of New Orleans funk. The results are, em, simply irresistible—especially the title track, an Allen Toussaint song originally recorded by Lee Dorsey.

I recently managed to score a copy of Palmer’s out-of-print 1980 album Clues. It’s a weird mix of styles, new wavey but with a bit of a Caribbean lilt. Especially odd is Palmer’s version of Gary Numan’s “I Dream of Wires,” with backing provided by Numan himself and Tubeway Army bassist Paul Gardiner. It answers the musical question, “What if Gary Numan had been a soul singer?”